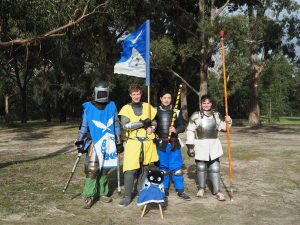 Long rivalry in Lochac comes to the fore; what fright!

What wily Celtic creatures will come out to play in war?
Join the battle, bones will rattle. Come see what is in store.

Garish Gaulish gods reign favour upon our dearest chums,
Especially those who join the party of supernatural shenanigans.

The College of St Monica will host four days of food, fighting and fun to once again bring the colleges of Lochac together.
The theme for this year is Celtic Mythology and Superstitions. 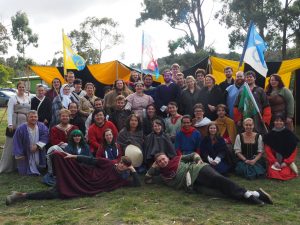 We will be running tourneys in Archery, Rapier and Heavy Combat.
The Day of War will be Saturday.
Arts and Science Competitions:
– 1. Children’s Toys
– 2. Mythical/Mystical Items
– 3. Performance: Celtic themed or early any early period SCA.
Several A&S classes with be run throughout the event.

If you’re not a current SCA Member, a $5 Insurance levy applies in addition to the above prices.