The Greek god Apollo embodies many virtues that form the strengths of our community. As he steers the sun across the clear blue skies, so the light touches and inspires all that he sees. With his arrows, he protects and defends the realm, joining his forces in battle. When he slew the python at Delphi, he granted those there the powers of wisdom and foresight, so they could guide their community with clear vision. A healer, he strengthens each individual and raises those who would be Champions to follow in his footsteps.

Champions emerge from all aspects of our community. All people, regardless of age, experience and prowess can reveal themselves as Champions.

The Champion’s role is to inspire others to participate and give their all in their respective field. The role of Champion is not limited to prowess; it incorporates all virtues, including humility, courage, agility, strength and wisdom. You should look to your Champions as a source of inspiration in your activities in the Barony. 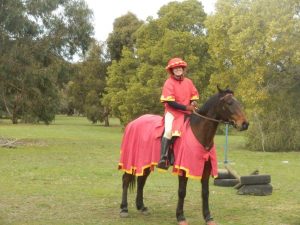