The theme of the ‘Day of Honour’ tournament and feast is that, each year at the time of the Barony’s birthday, the event will be inspired by a different region (French, Italian, English, Spanish, German etc), and set in ~1500 AD. Day of Honour’s feast for 2014 was set in Verona, northern Italy. 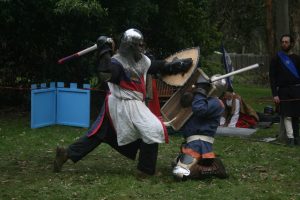 A total of 21 armoured combatants, and 10 fencers took to the field. Their Majesties, Niáll inn Orkneyski and Liadan ingen Fheradaig, graced the tournament field and fought with great valour in both fencing and armoured combat.

Awards granted to the populace by Their Majesties were:

Awards bestowed onto the populace by Cormac and Elspeth, Baron and Baroness of Krae Glas

Mistress Gwir: Order of the Starling, Arts and Sciences

The presentation of a plate to Their Excellencies, Cormac and Elspeth, was made by The Honourable Lady Ant Blowme of St Cloud. This plate was inspired by an Italian Maiolica plate (1525). 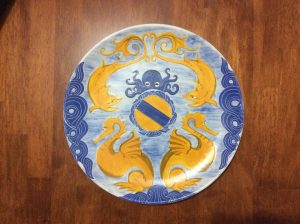 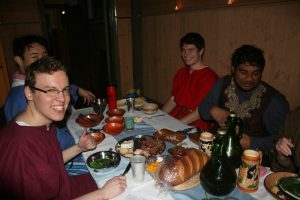 The feast was inspired by the wedding of Excellentissimo Signor don Alfonso d’Este to Serenissima Duchessa Barbara d’Austria, held at the Palazzo Bevilaqua, in Verona, Italy in December 1565. The entire wedding banquet was inspired by Neptune, and was entirely marine themed. This marine theme fitted well with the heraldry of Krae Glas, so we attempted to recreate this feast to fit the description as much as possible, from the decorations described to the food that was served. One of the most astounding foods presented at the wedding banquet of Alfonso d’Este and Duchessa Barbara d’Austria was a Trionfo di Nettuno, a sugar sculpture depicting Neptune, with giant whales cast in sugar, which was recreated for this feast: 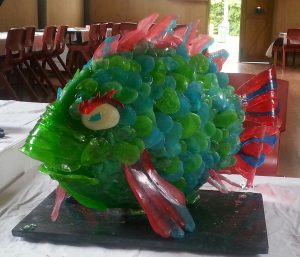 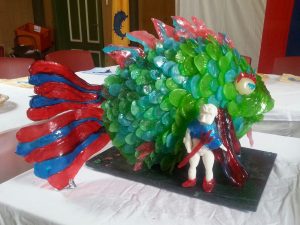